At the beginning of 2021, the Library of the Academy of architecture moved to its new, prestigious location in Palazzo Turconi. This happy circumstance provides an opportunity to review the history of the building and the library and to take a comprehensive look at the artistic and cultural heritage of the place. The building now known as Palazzo Turconi was originally conceived as a hospice for the poor, thanks to the written testamentary dispositions in Paris in 1803 by Count Alfonso Maria Turconi, but it was not built until the middle of the 19th century, based on a project by the architect Luigi Fontana, originally from Muggio. Inaugurated in 1860, the neoclassical building served as the Cantonal Hospital for the Mendrisiotto area for a century.
During the nineteenth and twentieth centuries, in guaranteeing medical care for the population, the Hospital was the object of important acts of charity on the part of wealthy families of the region, for whom the management of the time commissioned a series of memorials by the best local artists; the building thus also became a privileged place for commemorating the social and civil commitment of deserving citizens.
In 1996, the building became the seat of the Academy of architecture of the Università della Svizzera italiana, and only since then has been given the name of Count Alfonso Maria Turconi. The exhibition set up in the new library spaces illustrates, with original documents and unpublished drawings, both the life of Alfonso Turconi and the hospital project and building site carried out under the direction of Luigi Fontana. It also re-evaluates all the monuments and works of art preserved in Palazzo Turconi. These works fell into oblivion for several years because the building was used over time for different functions: first as a hospital and then as a teaching space for the Academy's design studios. Today, having been chosen as the seat of the Academy of architecture Library, Palazzo Turconi is once again a public place, a place dedicated to scientific research and looking to the future, as the Ospedale della Beata Vergine once was. 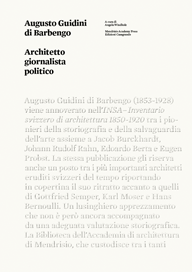 Augusto Guidini from Barbengo, Ticino (1853-1928) is rated in the Swiss architectural inventory 1850-1920 - INSA as a pioneer of art history and restoration together with prominent personalities such as Jacob Burckhardt, Johann Rudolf Rahn, Edoardo Berta and Eugen Probst. The same publication also places him among the most important and cultivated architects of the period by publishing his portrait on its cover next to the portraits of Gottfried Semper, Karl Moser and Hans Bernoulli. These flattering considerations have not yet been followed by an appropriate amount of historic and artistic research.
The Academy of architecture library in Mendrisio, curator of Augusto Guidini's and many other famous architects' book donations, now sets out to fill this gap and presents the results of new research based on previously unpublished archival fonds, direct sources, evidence from his built work, and his architectural heritage.
This first monographic study of Augusto Guidini's work, enriched by a complete and detailed atlas of built and unbuilt projects, publishes contributions by Riccardo Bergossi, Stefania Bianchi, Valeria Farinati, Arnaldo Guidini, Chiara Lumia, Ornella Selvafolta, and Angela Windholz. They trace the human and professional destiny of this versatile artist, refined draughtsmann and major intellectual figure of his times.
Augusto Guidini di Barbengo : architetto, giornalista, politico
a cura di Angela Windholz
Mendrisio ; Bellinzona : Mendrisio Academy Press ; Edizioni Casagrande, 2016
158 p. : ill.
Italian
ISBN: 9788877137272

At the conclusion of Augusto Rima's archive inventoring, the Library of the Academy contributes to the 9th Biennale dell’Immagine (organized by Galleria Cons Arc and the m.a.x. Museo in Chiasso, with the title TRASFORMAZIONI). It does so by exhibiting a selection of historic documents.
The photographs shown in the exhibition reveal the complex environmental conditions and engineering challenges connected to Ticino's watercourses management, as well as the ecological imbalances brought about by the booming economy and demography of this region.
Acque, infrastrutture e memoria - Una selezione di documenti fotografici tratti dall’archivio dell’ingegner Augusto Rima di Locarno (1916-2003)
a cura di Angela Windholz
in Trasformazioni : Bi9 - Biennale dell'immagine : 12.10.2014 - 11.01.2015
Chiasso : Progetto Stampa, 2014
p. 73-79

Sold by SilvanaEditoriale or at the library loan desk. 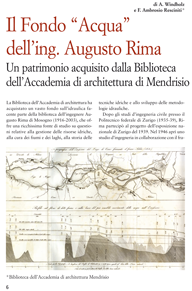 The Academy of architecture Library has acquired a large collection on hydraulics that was formerly part of the library of engineer Augusto Rima from Mosogno (1916-2003). It stands out as a very rich research source for topics regarding water resources management, lakes and rivers engineering, the history of hydraulic techniques and the development of water methodologies. This article presents the collection and describes its peculiarities.
Il Fondo "Acqua" dell’ing. Augusto Rima : un patrimonio acquisito dalla Biblioteca dell’Accademia di architettura di Mendrisio
di Angela Windholz e Francesca Ambrosio Resciniti
in Arte e storia, n.54(2012), p. 126-130